Those who know me will know that one of the loves of my life is our Cavspoodle Bosco. Having some Cocker Spaniel genes in the more usual Cavalier/Poodle makes him a delightfully complicated  and slightly neurotic little being.

One of the loves of his life is tennis balls. He has a running file in his head of where they are stashed, where one might have been hidden, which bed one is stuck under. if he finds a trapped or inaccessible one he will not stop whining and worrying until it is safely set free.

Recently I bought a ceramic lemon for the new bookshelves in our new house – no particular reason except it is pretty, matches our curtains and has a nice feel when you pick it up. 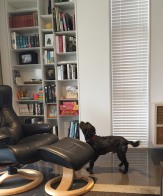 Upon spying it, Bosco went into full-on lost tennis ball mode. He was so excited to meet this new companion. I took it down and showed it to him and he was obviously shocked, then confused and then devastated – how could this be? He tried biting it and licking it and eventually settled for eying it with disgust. Back onto the shelf it went.

Bosco is a pretty smart little dog and usually learns things quickly.
Not so with the ceramic lemon. It’s been in our house for a month and I  will still often catch him staring at it longingly, or laying beneath the book shelves. Every time I take it down he is again surprised and 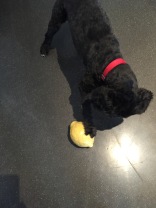 disappointed that it isn’t a tennis ball. I have even let him try to play with it. I am assuming that eventually he will realise that it is not, never has been and never will be  a tennis ball. But he can’t tell just by looking – he has to taste it and lick it to be convinced.

Despite a  similarity in colour and a vague likeness in shape these are not the same. One will break if dropped, one will bounce. One is flexible and one is unyielding. One will roll and travel, one will not. One has potential and energy, one does not.

There’s a few things in my life  that I thought were tennis balls that have turned out to be ceramic lemons. I have spent a lot of time re-examining and picking things back up and, like Bosco, being surprised to find out that they are useless inflexible items rather than the bouncy ball full of potential that I thought they were.

This year I’m keen to learn to leave the ceramic lemons  on the shelf and focus on getting on with ferreting out some of the tennis balls under the couch or buried in a pile of leaves, or even opening a tube of brand new ones.