Have I said how much I love York (yes I think I have!)

Had a delightful moment early on in the day when I was asked by a pair of fellow tourists if I could take a photo of them with their very expensive Canon 6D which I am pretty sure they had no idea how to use. Bravely took it off automatic, and got some nice shots, to which they proclaimed I must be a professional photographer – made my morning!

Explored the atmospheric ruins of St Mary’s Abbey. Once the richest abbey in the north of England, it was originally founded in 1055 and the surviving ruins date from a re-build that began in 1271 and ended in 1294.  It is quite a moving experience to stand in the ruins and imagine that this was a flourishing faith community at a time that we can barely imagine.

I then came back in a wet evening to  have an excellent steak and Guinness pie (another advantage to a cold, winter Christmas) and  to wander round the spectacular Christmas illuminations at the Yorkshire Museum Gardens that surround the abbey. Fortunately it stopped raining while I was having dinner, and due to it being November rather than December, I pretty much had the park almost to myself. What a treat – creative, dramatic and whimsical in turn as you walk from one installation to the next. Some are accompanied by sound, some are interactive and of course no Christmas display would be compete without Father Christmas himself (who informed me his brother Uncle Christmas had recently emigrated to NZ and was finding it much nicer than the North Pole).

I’ll let the photos of the day speak for themselves. Daytime ones were shot with my Canon 80D,and the night ones with the pretty impressive capabilities of my new iPhone 8+ 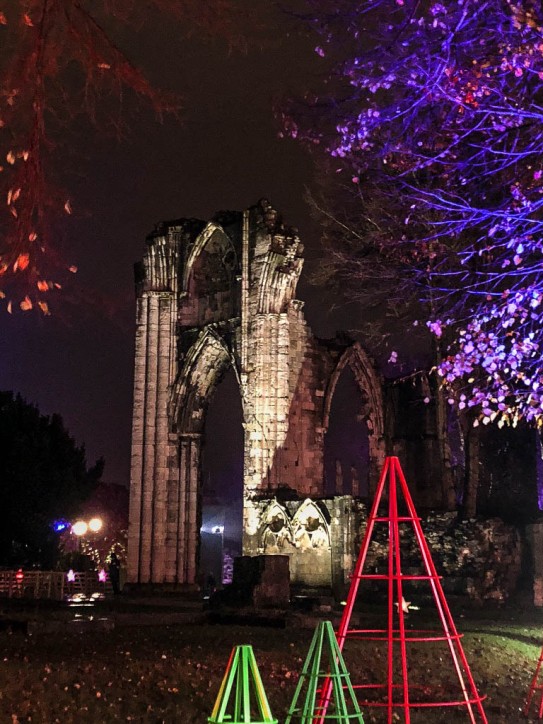