We departed Santa Cruz with the intention of checking out both Apple and Google HQs. We were stymied by the road system around Apple, ending up on the wrong side of six lanes – twice! Wayne blamed navigation, I blame the driver. We did get a glimpse of the building and 1 Infinity Loop roadsign. Google however was a piece of cake to find and travel around. Very unprepossessing campus for a company that influences  so much of our lives.

Then off to San Franscisco. We were congratulating ourselves on how successfully we were manoevuring around the city, and then we hit the notorious and insanely steep roads. 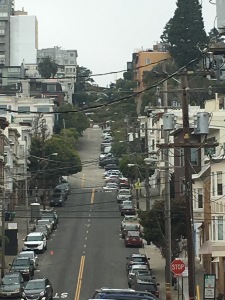 A four way stop sign every few hundred meters (and we still hadn’t quite got the hang of the “whoever gets there first goes first” rule) and we were very glad to finally find our hotel down by Fisherman’s Wharf. Of course after dropping the bags off we had to drive back up said streets and at one point as our under-powered rental car was required to make a hill start, we thought we would slide all the way back down.

And then we were free of the car and grabbed some lunch and a hop-on-hop-off bus to orientate ourselves. We pretty much fell in love with San Francisco from the time the bus started winding its way through some pretty iconic architecture. Through the gorgeous Golden Gate Park and then there was that bridge. The temperature must have dropped about ten degrees as we crossed but it was worth it for the views on the other side.

We had arranged to catch up with Christian for dinner and made our way to the stunning Yelp HQ in the heart of town. Slightly disconcerting to see him come out with all the other hip young coders looking more grownup and self-assured. The bandage on his hand had been replaced with a sci-fi looking  splint and he proudly showed us the pins sticking out of his healing finger. So good to put my arms around him and give him a real hug. 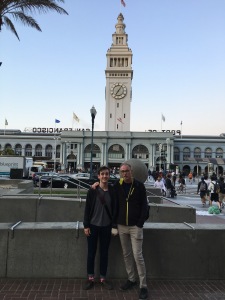 Dinner at the Ferry Building and lots to catch up on. 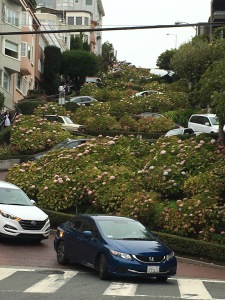 I had a brainwave to solve the tea issue and wandered to a nearby Walgrens to buy some tea bags. Feeling that some post breakfast burrito exercise was needed I decided to tackle Lombard Street (Wayne decided to stay back and watch soccer).  According to Fitbit that is 22 flights of stairs – must be very long flights! Mission accomplished and it was a wobbly legs walk back down to find the elusive tea bags. There was only find one box of Liptons  tea amongst (and I am not exaggerating) three shelves from top to bottom of coffee and coffee-related drinks. Should last Wayne a while! We then had a fun morning spent in the Haight and Ashbury hippy district. Some tie dye may have been bought, as well as a cute hat to replace my stupidly left-behind Panama. Hipster spotting also took place…
Then time to join the younger generation at MoMA  (and another real hug for a loved young person as Sophie was now with Christian) to spend the  afternoon soaking up the treasures within. After waiting so long to seriously travel, the impact of seeing such stunning creativity was quite overwelming. Burgers for dinner and a cable car ride rounded the day off nicely. 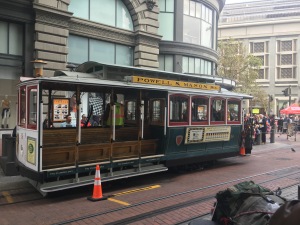 Sunday we had a bit of a treat with a foodie tour around the permanent market at the ferry building. Delicious food and lots of background info about some of the producers. Local sourcing and sustainability  is so common now, but San Francisco was doing this long before many places so it was good to get some of the history (and taste it!). Fresh sour dough baguette, gooey cheese, perfect macarons and the most amazing autumn fruit pastry still hot from the oven. 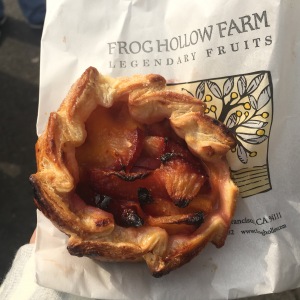 This was in stark contrast to our afternoon – Alcatraz. History of another kind carved into this forbidding island. Tales of attempted escapes, most ending sadly. The ranger who told us these stories commented that the punishment wasn’t Alcatraz itself, that the prisoners were treated fairly well. It was being able to see, hear and even smell normal everyday existence so tantalisingly close that drove people to try and make their escape. 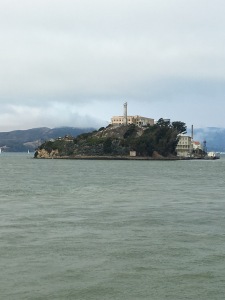 I wonder what it must have been like for people in the city as well when the prison was open. It is unusual to have a prison so clearly in  view. Not only would the prisoners have been able to hear life on the mainland, I would imagine that the sound of gunshots and sirens would echo across the bay from time to time. Did they worry each time this might be the time someone escaped successfully?

We spent the evening with a delicious  dinner at Waxman’s celebrating a raft of things – Christian’s upcoming birthday, his great first year results and Sophie’s acceptance into a prestigious UK university. Conversation ranged broad and deep – they seem much older than their teenage years and I was excited to think of where they might go and what they might do.

Monday we discovered a great little breakfast place that felt like home, and I had a San Francsico favorite, a  lavender latte (yum). In the afternoon we were privileged to get to visit Christian  at his internship. Had to sign a non disclosure agreement so can’t really say anything except that it’s a pretty cool place to spend your summer break.

We finished our visit with the San Franscisco classic of clam bisque in a sour dough bowl (with a side of fresh sour dough…) perfect way to end and we were sad to say good bye to this beautiful city. Vibrant and funky, I hope we will get back.

Looking forward to New York – it has been a dream of mine to visit this city for a long time. I’m sure it won’t disappoint. 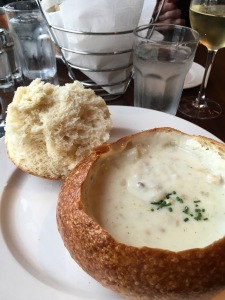 3 thoughts on “A bridge, a prison and a reunion”